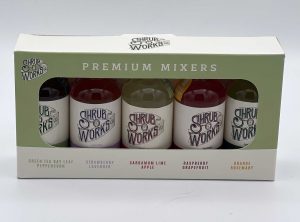 A shrub is a vinegar that’s been infused with fresh, organic fruits and herbs. nuHealth is now selling Shrubworks healing, organic and local shrubs, sourced from Pacific North West Farms and growers.

According to the Pacific College of Oriental Medicine, the raw, organic, unfiltered version can:

And though some of the benefits (namely ACV’s role as a shampoo alternative and cure-all skin toner) are more word-of-mouth than proven by science, there are some hard facts to back up all the rave reviews.

Still, it’s important to exercise caution when consuming vinegar. For the safety of your teeth and esophagus, we suggest diluting in water (tonic or soda water is fun, too!) instead of drinking it straight. And try not to exceed the recommended one to two ounces per day on a regular basis (15 ml is about half an ounce). Give the recipe below a try with our shrubs we have in store for you now!

Shake over ice and garnish with a dash of cinnamon and slice of apple.