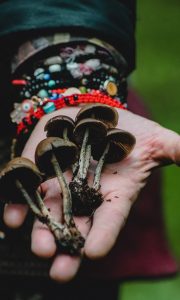 Scientists have discovered a food pairing that just might add years to your life.

According to a large prospective cohort study in Nutrients, long-term consumption of mushrooms and algae reduces all-cause mortality among older adults.

Previous observational studies have linked higher intakes of mushrooms and algae with lower risks of cancer, hypertension, type 2 diabetes, hyperuricemia, and cognitive impairment. And a recent meta-analysis (including five prospective studies) identified an inverse association between mushroom consumption and total mortality, although inconsistent findings were observed across studies.

Mushrooms and algae are particularly rich in bioactive compounds, including dietary fiber, minerals, polysaccharides (e.g., β-glucans, chitin), vitamins, and antioxidants. Mushrooms, for example, are the best food source of ergothioneine, a sulfur-containing antioxidant that cannot be synthesized by the human body.

For this study, researchers used data from the Chinese Longitudinal Healthy Longevity Survey (CLHLS)* to investigate the association between mushroom and algae consumption and all-cause mortality.

Dietary intake was measured through a simplified food frequency questionnaire (FFQ) by face-to-face interview. Participants were asked how often they had consumed mushrooms and algae over the previous year and at age 60, respectively. Categories included:

During an average of 5.7 years of follow-up (74,976 person-years in total), there were 8,937 death cases. An inverse association between higher intake frequency of mushrooms and algae and all-cause mortality was observed, compared with the “rare consumption” group.

As compared with subjects who had rare intake patterns at both age 60 and the study baseline (average age of 86.9 years), participants who maintained regular intake pattern over time appeared to be inversely associated with all-cause mortality.

“As compared with participants who rarely consumed mushrooms and algae, those who consumed regularly (at least once per week) had a 14% lower risk of death. Inverse associations persisted among major subgroups across gender, type of residence, BMI, and history of major chronic diseases. Furthermore, we observed that participants who maintained regular consumptions of mushrooms and algae both at age 60 and the study baseline had the lowest risk of total mortality,” say the researchers.

*The Chinese Longitudinal Healthy Longevity Survey (CLHLS) is an ongoing prospective cohort study on centenarians, nonagenarians, and octogenarians with a comparative group of older adults. Started in 1998, the CLHLS sampled community-dwelling older adults from 23 of 31 provinces throughout China. Participants were followed up with every 2–4 years thereafter, and new participants were enrolled in each wave. Face-to-face interviews were conducted with a structured questionnaire by trained health workers.

Read the rest of this interesting article!